Trisha Bossio started her career in accounting and marketing with a small commercial property
management/building company in the early 80’s. She continued to grow her career over the past thirtysix
years and is currently the Executive Vice President of a successful real estate development company
in metro Detroit.

In addition, she and her husband own and manage a real estate consulting and management company
that assists low income and homeless persons, through the Michigan State Housing Development
Authority, with their housing requirements. She has assisted many homeless veterans in the Detroit
metro area in obtaining housing by working with local non-profit organizations through a program known
as VASH, sponsored by the State Housing Development Authority.

Since the enlistment of Trisha’s children, she has been an active supporter of our military on the home
front. In 2014 she co-founded a non-profit 501(c)3 organization, Soldiers Around the World, Inc., (SAW),
and currently serves asits President. The organization’s mission has been entirely focused on sending care
packages to deployed service members through the assistance of local business, churches, VFW and
American Legion organizations.

Trisha has served on many boards and committees over the course of 30 years. Some of them include;
President of the Parish Council at her church, numerous Homeowners Associations and school boards, as
well as served on executive committees at a private grade school, high school, the American Legion
Auxiliary Unit 396, and volunteered as an American Red Cross blood drive coordinator. In addition, she
has been an active fund raiser mom for her son’s travel hockey teams and an equestrian coach to her
daughter. Both of Trisha’s children and her family are or have served in the U.S. Army and Air Force; her
active duty son has served 4 years in the Army as an 82nd Airborne paratrooper, completing one tour in
Iraq, her veteran daughter served four years with the Michigan Army National Guard’s Military Police, her
father served in the Air Force and her husband served in the Army as an 82nd Airborne paratrooper.

Trisha resides with her husband, of twenty-seven years, in the suburbs of Detroit, Michigan and prides
herself in being an Army Strong Mom with a lot of Army Strong friends!

Dawn Sharrow retired as a Senior Graphic Media Technician at a large firm in Metro
Detroit where she had been employed for the 32 years. After one year of retirement
she returned to work part time working with a local property management company
assisting the homeless and underprivileged with their housing needs.

Dawn has been married to her husband for 30 years and has two children. Her son is
an active duty Staff Sergeants in the United States Air Force. Her beautiful daughter is
pursuing a higher education and often assists Dawn with her community volunteer
work and fundraising activities.

In addition, Dawn is a member of the VFW Ladies Auxiliary in Garden City, Michigan, (Post
7575). She is also an active member of the American Legion Ladies Auxiliary in Garden
City, Michigan (Post 396) and currently serves as their Senior Vice-President. She
participates with both organizations in a multiple number of fundraisers throughout the
year which serve both the civilian community as well as local veterans.

Dawn’s passion for giving back to her community has taken many forms of
fundraising. She enlisted her past employer to participate and coordinate the Toys for
Tots fundraising activities for 27 years. She led the program that included toy
collections, raffles, chili cook-offs and football squares, with all donations going
directly to Toys for Tots for the purchase and distribution of toys to local children.
Many children throughout the Metro Detroit have been able to open a gift on
Christmas morning due to her dedication and drive to give back to her community.

In 2014 Dawn led a military donation drive at her office that resulted in enough products
collected to package over 400 care packages for deployed service members serving down
range. She brought this experience with her as a founding member of Soldiers Around
the World, Inc., a 501 (c)3 non-profit organization, whose mission is providing care
packages to deployed service members. She currently serves as their Vice-President.

Dawn and her family are members of Peace Lutheran Church in Livonia, Michigan and
they enjoy volunteering and spending time with each other and their extended family. 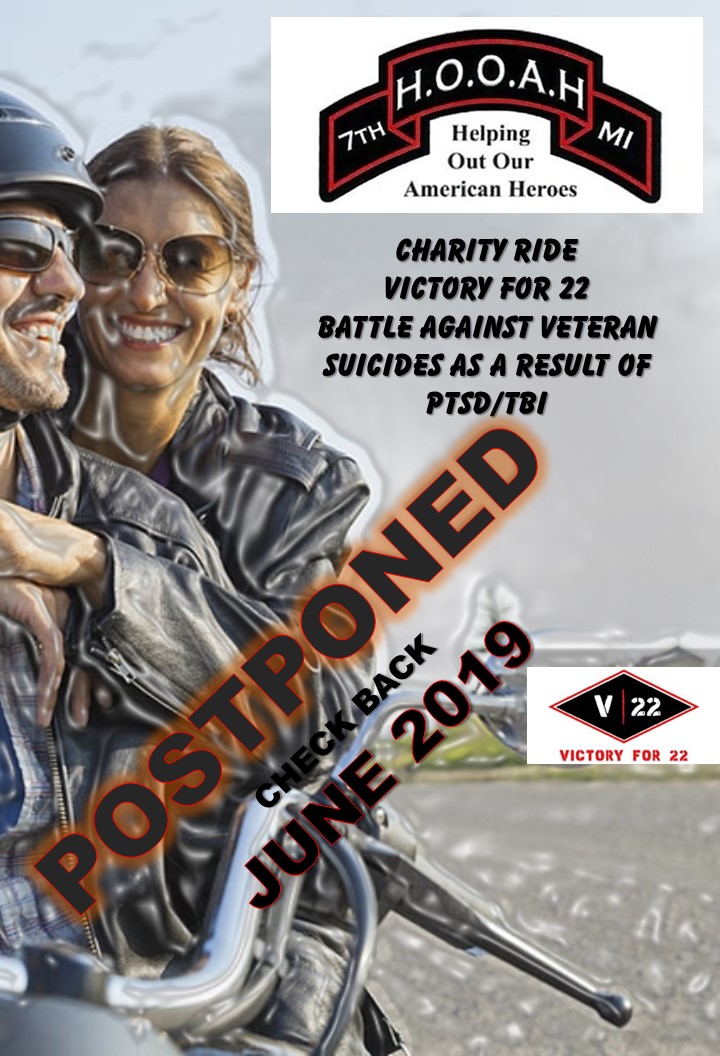 7th HOOAH Michigan is a State chapter of HOOAH Inc. that was founded in 2015, after a U.S. Army Special Operations Force soldier from Michigan attempted to commit suicide. The chapter rapidly stood up to address this problem amongst our Special Operations Force (SOF) community. Additionally, the chapter wished to provide support and to extend the services available from within HOOAH Inc. to active duty personnel from Michigan, to veterans within our State, and to our local military families when issues or unforetold circumstances arise.

There are no upcoming events at this time. Check back soon!

Making a donation to H.O.O.A.H Inc. is a rewarding and heroic act in support of the men and women who sacrfice so much for our civil liberities and freedoms.