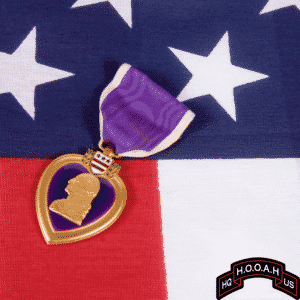 I first learned about the Purple Heart medal from my father when I was a little boy.

He received his for injuries sustained while in Vietnam.

He pulled up his shirt and flashed my brother and me the scars on his back with a fatherly sort of pride, but seemed reluctant to show any pride for the medal itself.

Like it was only a scratch not worthy of mentioning let alone honoring.

Maybe he thought it should have been expected that he’d take a hit or two.

It was war after all.

I know he didn’t think you should be rewarded for doing your chores.

To him, it was only some small pieces of grenade shrapnel that hit him in the back.

He told us he was sent back into action almost immediately so it must not have been that bad.

He scoffed that it was nothing compared to the other guys who lost life and limb over there.

But, I remember being amazed that one of those pieces of shrapnel was lodged in a bone so close to his spinal cord that it couldn’t be removed without risking spending the rest of his life in a wheelchair.

Whenever he talked about it he’d say it was still in there – the war.

To me, it all sounded like my dad was a hero.

I didn’t really understand why he didn’t think so.

Or why it seemed he didn’t think the Purple Heart was meant for him.

In hindsight, I believe he felt deeply that the guys who weren’t so lucky deserved it more, and that his pride would have diminished their sacrifice somehow.

Of course, he still took the opportunity to explain how important it is to honor the soldiers who fight for their country, but his humility was his way of honoring those less fortunate than he was.

Eventually, Dad would distance himself entirely from the little reminders of his time in the jungles of Vietnam.

And who could blame him?

I don’t know what became of his Purple Heart medal.

I only saw it that one time with my brother.

He most likely lost it in a moving box somewhere along the way as we shuffled through the 80’s.

Though he may seem careless or irreverent of such an honor, my reverence for the Purple Heart is inextricably linked to the memory of my father as a humble hero.

The US military has been awarding the Purple Heart Medal for over a century, and its roots stretch all the way back to George Washington.

In Washington’s day, there was a need for recognition of the countless soldiers whose brave sacrifices only lived on in war stories shared between survivors.

The president believed there needed to be a formal way to honor those men and make record of their bravery and valor.

On August 7,1782, with the United States still in its infancy, he began the longest standing US military honor – The Badge of Military Merit – which evolved into the Purple Heart medal we recognize today.

Though different days throughout history have been sited as a time to remember Purple Heart recipients, August 7th has been accepted as national Purple Heart Day.

Today, HOOAH honors those brave men and women and encourage your continued support of veterans through organizations like ours.

At HOOAH, we realize that, though many of the scars of battle are easy to spot at a glance, most of them are worn on the inside.

There are no medals awarded for the war-torn mind of a soldier with PTS.

For some soldiers the emotional and psychological difficulties they face while at war are just as prevalent when trying to assimilate back into civilian life.

Many problems have been attributed to the long lasting effects of traumatic events like the ones that they experienced on a regular basis while at war.

Today, PTS is the term used to describe those effects and has become ubiquitous.  Since 1980, the influence and effects of Post Traumatic Stress (PTS) have been studied at great length and new treatments are always emerging.

To learn more about some of the newest emerging treatments, watch the story at https://hooahinc.org/media/

HOOAH is a 100% Volunteer National Veteran Nonprofit dedicated to serving those who serve us.

I first learned about the Purple Heart medal from my...